Being Cheap vs Time

Sometimes things just don't seem like they are worth the money.  And yet, I feel like I have my dad saying the same thing over and over in my mind, "Is it worth the time for the amount of money you save?"  Here are a few examples: 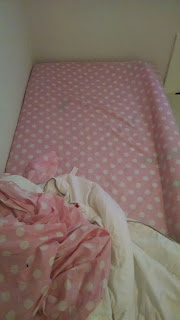 I received Madison's sheets for free when we bought the mattress and box spring.  They are cute and girlie and fit for a toddler.  However, there was one problem with them that was driving me insane--the sheets elastic was worn and so everytime Madison touched the sheets they would pop up.  I was getting sick of daily fixing the sheets.  You can find cheap sheets, so the search began.  I've seen cheap sheets, but it just happened that I couldn't locate any I liked this time around.  Then I remembered I had elastic from some nice king sheets I cut up for her comforter that I could reuse.  It seemed like a quick and easy project to do--cut out the elastic from the king sheets and put them in the twin.  It still took me a few hours to cut all the elastic out of the king sheet scraps.  They were sewn in pretty well and there was plenty of unstitching to be done.  In the end the elastic was replaced and now her sheets are perfectly functional.  A couple hours=$10 savings. 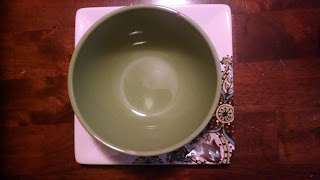 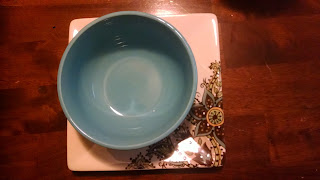 I found some dishes I liked way back when I was single from Bed Bath and Beyond.  I knew I wanted wedding china when we got married, but felt like it would be too greedy to ask for multiple sets of dishes (I now know I could have just put theses on the registry and received both easily).  Instead, over the course of some birthdays and Christmas I slowly acquired the dishes I wanted.  I put them away until I was married--they are the kind where eat plate is $10 and bowl is $6, or something like that.  Essentially, once full place setting cost some money and I have 8 place settings.  I remember picking out green bowls and mugs over the blue ones specifically because the blue were clearance and I was afraid I wouldn't be able to restock them when I needed.  The time came this summer to get some new bowls, but I didn't really want to pay that much anymore for a single bowl.  I searched online to see if I could find some cheaper somewhere and it looks like the green is also impossible to find.  While at the dollar store one day I found blue bowls that matched my plates perfectly.  I had to think about it, but I went back later that day and bought all the blue bowls (6 of them) for $1/each.  This felt like one of the winning cheap moments. 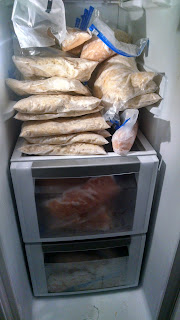 (You can't tell, but the two bottom bins are full of chicken)

The past little while I've been buying chicken online from Zaycon.com.  I got sick of buying chicken at the store that had water and chicken flavoring pumped into the chicken.  I really don't understand why chicken breast would need "chicken flavoring".  Zaycon chicken doesn't have any junk in it and usually you can get it cheaper than what chicken cost other places.  The only catch is you have to buy in 40 pound boxes.  This last time it was even cheaper than what I paid previously ($1.69/lb I think),  I became a bit over zealous and  bought two boxes!  I figured I had the freezer space, so why not. Our chicken is prepped into the following:  cubes (This made up for almost 40 lbs and is my favorite option because I can pull a baggie out and defrost in just a couple of minutes.  It is also faster to cook than large pieces), bbq, fillet, crockpot, shredded, and ground.  The shredded and ground chicken were new prepping types this time around.  Why did I wait so long to do these? I cooked the chicken in my crock pot, shredded, and then put about two cups of chicken per baggie before freezing.  The ground chicken we ground up while it was partially frozen in my food processor.  The only problem is that I like to prep all my chicken before it goes into the freezer and this takes a bit of time.  7 hours or so later (it always is finished after midnight/1/2a.m.) I was done prepping.  Half way through I always wonder if it is worth the time to prep the chicken and cut all the fat off.  I felt in desperate need of a shower always afterwards and my back and fingers were aching.  I've come to the conclusion I do save time in the long run to prep everything beforehand--way faster to pull shredded chicken out of the freezer rather than boil it each time I need shredded chicken.  "What? its dinner time I have haven't made anything yet and am starving?  No problem, because I can whip something up way faster with my pre-prepped bags than I could otherwise.  Chicken enchiladas on the table in 30 minutes!" 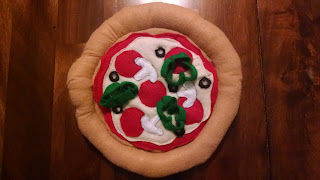 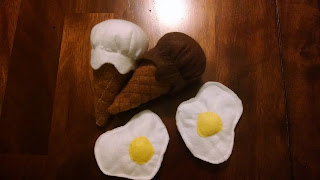 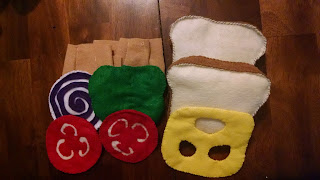 Madison is all about pretending these days.  She likes to make food for us to eat.  I wanted to get her some felt food for her birthday and Christmas, but it is pretty pricey.  Instead, I went to Joanns and bought some fabric and other materials to make it myself.  I found a pintrest link with over 100 free felt patterns/ideas.  Of course, each item takes me a whole lot longer to sew than I planned for.  There is also more hand sewing than I anticipated, which is also a slower process.  Good thing I started early because it's going to take me a while.  I'm hoping to get it all done before Clark is born.  Tyler is going to make her a play kitchen from Santa (at least that is the plan right now).  The reality is, even with felt food expensive, I could easily work for my dad a couple hours and buy it all instead of making it myself...it would probably look a lot better also.  However, I find that it is nice to have something on the side I can do instead of always doing work in the evenings (plus there is only so much work to be done).  I think it is good for me to have a side craft to do.  (I would also like to have time for more Sihlouette projects, but can't bring myself to buying the wood right now--we had to leave all my craft wood in Utah when we moved) 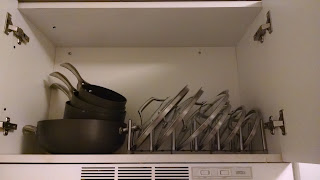 We picked up some parts ($10) for Tyler to make me pot and lid racks in our kitchen.  Something seems to fall each time I need to get a pot from above me.  Tyler has been too busy to make them yet, and I wasn't really sure where we would put them.  After some searching online at Amazon I saw that Ikea had some cheap organizers, which I would be able to easily reuse in any apartment/house.  Lucky for us we have an Ikea here and bought two of the organizers for $12, which is about what Amazon sells per organizer.  I really like them and think this was worth buying over making.

Tyler needed a computer for school since Johns Hopkins will not be furnishing one the way that Utah State did during Tyler's Master's degree.  Tyler wanted a strong machine that would last for a long time and be robust enough to run statistical software.  He scoured the internet til he cobbled together enough deals to make a desktop computer for under $400. This was worth making as this same computer would retail for around $800. 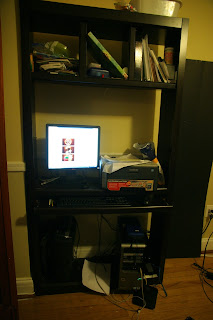 When we arrived in Baltimore it was apparent that the bookshelf that Tyler bought several years ago was knocking on death's door.  It just wasn't very stable any more.  We also needed to buy a computer desk for our new desktop computer that Tyler made.   Well.... we were trying to figure out where to buy a cheap desk, or how to get cheap wood to make one and our eyes fell on the decrepit bookcase.  Tyler used some glue to put back in shelves that had fallen out, cut one shelf in half to make cubbies up at the top, and installed the last shelf on some drawer slides so that the keyboard and mouse could slide out on their own tray.  Moving a second shelf up (for the mouse and keyboard) helped provide stability in the middle, and making the cubbies up top also provided additional support.  In all, we got rid of an old bookcase and found a new computer desk for just $10 (for the drawer slides).  Win for us!

In the end, I think the logic says it would be better to save the time and work for my dad which pays way more per hour than what I save doing something myself.  However, by trying to find different ways to save, even if it takes forever, I think it is a good habit to gain, especially as we go back to school and will be taking student loans out.