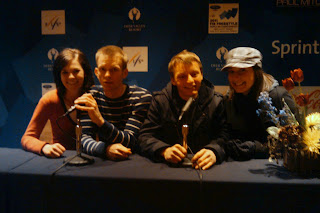 This was taken in Park City.  We went on a double date with Lauren's roommate, Jayrin, and her hometeacher, Ty.  We went to the World Skiing Championships--something that I thought was a really good idea for a date.  Lauren and I had been seeing each other for some time by now and I was ready to make a move.  That's right, people, I was going to up the ante, and hold her hand.  I picked the day carefully, a date when we would be out in the cold winter night.  It was February 5, 2011, and it was a cold night at a very high altitude which made it colder.  We obviously both arrived for the date all bundled up, but I also had the foresight to bring a blanket.  I figured we could share it and that maybe I could hold Lauren's hand under it.

On our way to Park City Lauren was telling me about a new book that she got called The Birth Order Book.  As we talked about it she informed me that according to the book, middle children should not marry people who are also middle children.  Her bringing that up wasn't a good sign for my plans to hold her hand, but I looked past it.  We arrived at the ski resort and headed up.  As we stood there watching the athletes I pulled out the blanket and asked a question that should have had an obvious question given how cold it was outside, "Do you want to share this blanket?"  Her response was equally cold: "No, I'm okay."  I told her to let me know when she wanted in the blanket and I would let her.  By the end of the evening she couldn't take the cold anymore and asked if she could share the blanket.  I threw it around her shoulders and kept my arm there around her.  I thought it was a good sign that she would let me put my arm around her and would transition well into hand holding later, but it was not to be.

On our way home hand holding came up in the car conversation.  Lauren and I were sitting in the backseat while Jayrin and Ty were in the front.  When the hand game came up, Lauren asked what it was.  All of us were a little surprised that she didn't know what it was, but I was more than willing to explain it as I anticipated playing it very soon and needed her to know the rules.  One person puts their hand on their thigh if sitting down, or swing it by their side if walking--the idea is to make the hand very accessible.  The other person then reciprocates by putting their hand out to show that they also want to hold hands.  It is a done deal from there.  As I finished explaining Lauren proclaimed emphatically, "That's dumb!"  I shrugged, but I still figured that now that she knew she would have to recognize the signs when I put them out there.  Wrong again.  We ended the night by all going back to Lauren and Jayrin's apartment and watching an episode of a TV show that we like, Psych.  Our couch was perpendicular to direction of the TV and Lauren chose the end of the couch that was furthest from the TV and then proceeded to recline back away from me.  I had no chance.  I finally got to hold her hand on Feb 10 when I verbally told her that I had been trying to hold her hand for a week without any luck and asked if that resistance was reflective of how she really felt.  It wasn't, she had just decided not to play the hand game and had never noticed my signals.  She also admitted that she was very frustrated that I hadn't made a move yet. 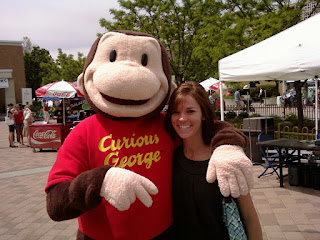 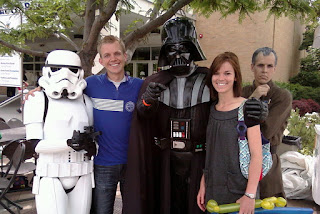 This is at BYU's summer book/reading festival.  We went for the day and had a great time.  We saw a production of The Taming of the Shrew done by little kids which was great.  The whole day was very memorable.  After it was over we went back to my apartment and I made us quesadillas and we also snacked on some fresh cherries. 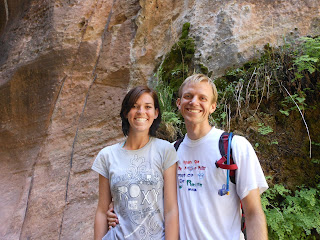 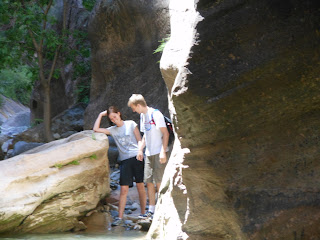 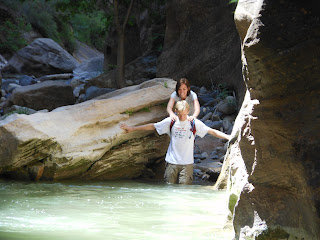 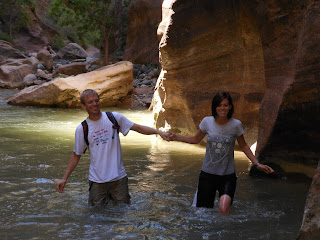 Here we went camping with a large group of friends and then hiked the Narrows.  The water was extremely chilly. 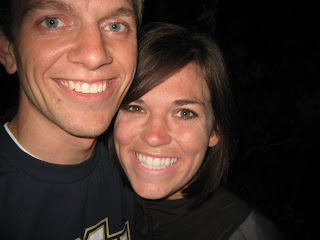 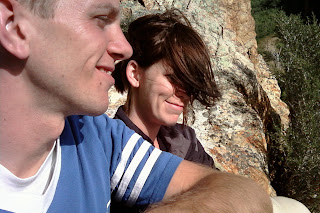