Jay-Z released a song a few years ago that comes to mind whenever I think of New York.  I don't listen to Jay-Z, but the song was a megahit and hard to avoid.  The part that sticks out is the chorus:
"In New York,
Concrete jungle where dreams are made of
There's nothin' you can't do
Now you're in New York
These streets will make you feel brand new
Big lights will inspire you
Let's hear it for New York, New York, New York"

This is on my mind because I'm writing from New York.  Well, really from our Airbnb rental in Garfield, New Jersey.  Lauren went home this afternoon to pick up the kids from some friends in Baltimore, and I'll present a paper at the national education research conference.  We left Baltimore on Friday morning, and saw the Statue of Liberty, Ellis Island, and Ground Zero on Friday.  On Saturday we completed an endowment session at the Manhattan Temple, met with a professor that I wanted to network with from UConn, saw Wicked, walked a portion of the High Line, and tried out a few restaurants.  Here are some pictures, in sequence: 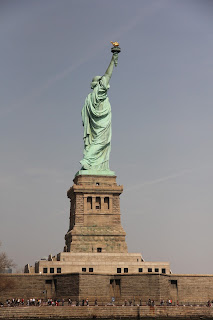 Below is Lauren, people-watching, and looking good doing it.  It struck me during this trip that she was pregnant with Clark during our last getaway, to San Francisco, and our vacation before that (to DC) was when she was pregnant with Madison.  But this lucky baby gets two trips, because we're due for a trip to Boston this summer (since we don't know if we'll be around for the summer next year.) 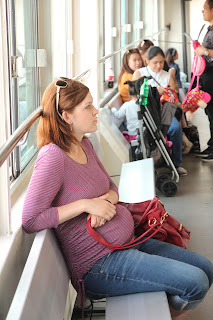 Below is part of the NY skyline, as seen from the ferry. 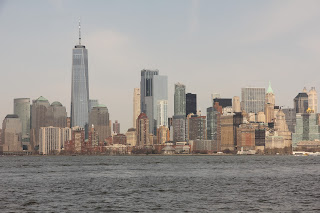 And here is a closeup of the new world trade center tower that was built to replace the other two. 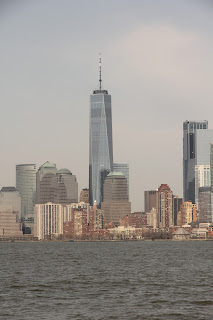 Here we are at Ellis Island.  The phone handsets are audio tours.  In this picture Lauren is sitting on an original Ellis Island bench that immigrants would have waited nervously on, to learn if they could come in or have to turn around and go home.  Only about 2% were sent home, but over the years that totaled about 250,000.  Ellis Island stopped functioning in about 1953. 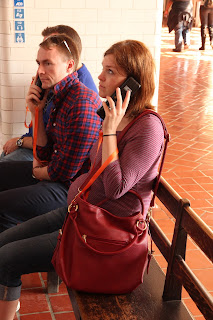 Street performers around Battery Park, where the ferries dock.  The photo doesn't show it, but there is a third performer on the bottom.  Only two of the three performers are shown. 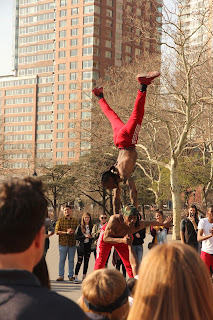 Here is Ground Zero.  There is another one, just like it, where the other tower stood.  This is the south tower. 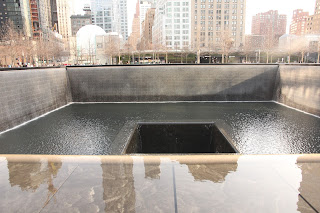 Below is us after Wicked, thoroughly impressed.  When we moved to the east coast, we both had some things we wanted to do or see while in the east.  It's a short list.  I could probably count it on one hand. I think it goes something like: Monticello, Independence Hall/Liberty Bell, Boston, Wicked.  Honestly, I had unrealistic expectations for Wicked and I didn't expect it to live up to them.  I was told it was just amazing.  But I was skeptical because it was hyped so much, and it is a musical, which I don't always love--but I do like some musicals (Fiddler on the roof, for example).

Wicked knocked my socks off. 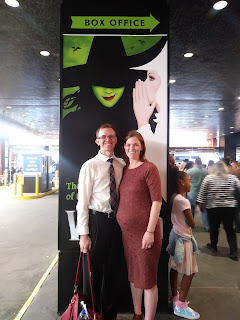 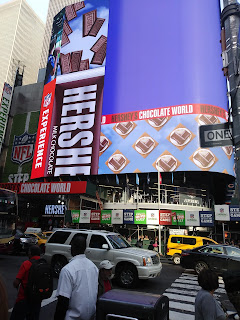 This Taco place is on 43rd, between 7th and 8th ave.  I've had lots of authentic mexican food, but this was soooo good.  I'm going back tomorrow after I present and before I go home.  It was the best food place we tried (which admittedly wasn't as many as we wanted to try) 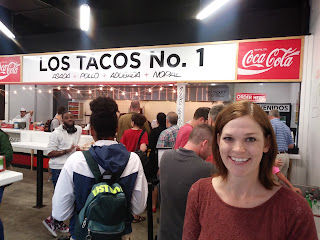 Here is some New York pizza.  Good pizza, but nothing you couldn't find at a good pizza place elsewhere in the country.  I had chicken and broccoli and Lauren had chicken, bacon, ranch. 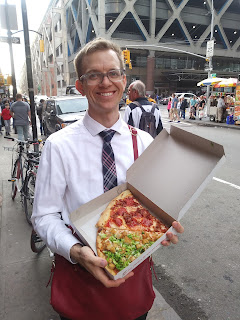 Below are two ridiculous pictures of Walmart, where we stopped to pick up an umbrella for me because rain is in the forecast.  Lauren and I laughed on and off during our five minutes in the store because EVERY isle we went down was blocked off, "for safety" (remind anyone of Utah's basketball team?)  You'll notice that in one of these pictures, the store resorted to plastic wrap--presumably because they were out of gates. 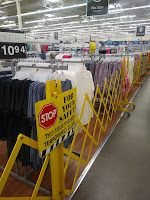 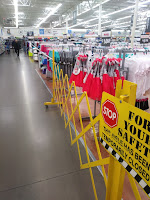 We stayed in New Jersey and took the trains in every day because the basement we rented in New Jersey was about 1/4th of the price (from $200 to $50/ night) as Manhattan hotels.  Of course, navigating an unfamiliar public transportation system didn't come without its hiccups.  We had a 3 minute window to catch a transfer train on our way home last night, and got on the wrong train.  It set us back an hour.

Lastly, at church today, we visited a nice small ward.  I always feel bad when we visit wards because people's faces always fall visibly when we tell them we're visitors and not new move-ins.  But I understand, visitors are infinitely less exciting than new additions to the ward.  However, on the opposite side, it is not as exciting to say "we're new" as I think it should be.  Whenever we tell people we're new move-ins, their faces don't get any brighter.  They don't appear crestfallen, it is true, but the conversation ends equally quickly, "Well, welcome."
Posted by Unknown