Out garden has had some struggles this year.  All of our vine plants were attacked by pest.

First we have the vine borer:

http://www.extension.umn.edu/garden/insects/find/squash-vine-borers/
Often the first symptom of a borer attack is wilting of affected plants.  Wilting may occur only in strong sun at first (fig. 3), but if the problem is left unchecked, the plants eventually collapse and die. Closer observation of a wilting plant often reveals holes near the base of the plant filled with moist greenish or orange sawdust-like material called frass (fig. 4). Over time, the base may become mushy or rot away altogether. Several borer larvae may attack a single plant.

http://www.extension.umn.edu/garden/insects/find/squash-bugs/
Squash bugs have piercing-sucking mouthparts that they use to suck the sap out of leaves. Their feeding causes yellow spots that eventually turn brown (fig. 6). The feeding also disrupts the flow of water and nutrients, which can cause wilting. However, unlike cucumber beetles, squash bugs do not vector diseases. Young plants are much more susceptible to damage and may die from extensive feeding. Larger, more vigorous plants are more tolerant of feeding damage, although they can also be injured or killed if they severely attacked.Early detection of nymphs is important, as adult squash bugs are difficult to kill.

I just thought these were weird looking lady bugs.
http://www.almanac.com/pest/cucumber-beetles
If you find that the stems of your seedlings are being eaten off, leaves are yellowing and wilting, and holes are appearing, you may have a striped or spotted cucumber beetle. Cucumber beetles are found throughout the US and cause much of the same damage as flea beetles do. They are attracted to cucurbit vegetables, namely cucumbers, squash, pumpkins, and beans.
Often, the beetles leave their hibernating sites early in the season, and feed on seedlings right as they are emerging, often killing them. The larvae feed on the roots of the host plants. Adults will also feed on the leaves, vines, and fruit of plants that survive, often making deep marks in the rind.
They hold another threat too: They can carry bacterial diseases and viruses from plant to plant, such as bacterial wilt and mosaic virus.

We ended up having to pull up all our vine plants--cucumbers, watermelons, pumpkins, and spaghetti squash.  We did get two spaghetti squash.  I did kill two vine borers in one of the squash.  Then I had to pull our best tomato plant because it was wilting, probably from a bacteria or fungus.  I'm hoping it doesn't spread to the other tomato plants.  Good thing we have 6-7 tomato plants.  Too bad it was the yellow pear one, which was the one I was most excited about.  There were about 30 tomatoes growing on it.  Our corn tastes a bit startcy, so boo to that.  Everything else seems to be doing okay.  It's been tons of fun to grow carrots, my basil is awesome, and we still have other tomato plants.  We are even getting some bell peppers growing.  Next year more carrots and sweet potatoes again. 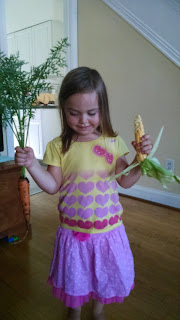 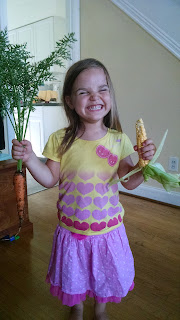