This past Friday we woke up to it snowing!  We have had a pretty big storm hit us.  It only snowed for a few minutes, but the wind blew like crazy!  It was howling all night long.  I had to leave for my ultrasound quickly, so we left Tyler at home to do school work while I took the kids with me for the day.  I dropped my kids off at a friends house and headed to the hospital.  All looks good and I guess we will find out in 6 months what we are having.  We are predicting a boy.  Upon picking up my kids, my friend informed me that Clark had a blow out!  I felt so horrible...there is nothing worse than having to change a poopie diaper of a kid that doesn't belong to you....oh wait, yes there is--when that poop is smeared all over the back.  Surprisingly Clark fits some size 4 clothes pretty well that we borrowed.  (He just went on a growth spurt--that kid can eat on growth spurts!)  The kids and I couldn't return back to our house just yet because Tyler wouldn't get anything done.  We decided to run errands.  Remember that wind?  We got to Target and I told the kids to let me open the door for them because the wind was swinging the doors wide open.  Madison chose to ignore my advice and started to open the door and the wind blew it right into the car next to us.  Yep, we put a nice black dent into a white car.  We didn't leave a note.  We didn't need to as the person was sitting in her car.  She was so very kind and said it was okay, although I am not sure she realized the damage that was done.  We also hit up Staples (recycled an old printer), Costco, Aldi, the library and Joanns.  There were some massive trees that were blown down and we even watched a street lamp go down while waiting at an intersection.  We even got to drive under a fallen tree.  When we got back we parked our car a block away just so it wasn't by any trees or lights.  Maybe we shouldn't have gone out... I'm pretty pleased to say that we stayed out of the house from 9 until after 5 for Tyler's sake.  We are pretty lucky as many of our friends haven't had electricity for a few days and their houses are currently freezing.  We had some friends over yesterday to get them out of their house.  They helped us clean our basement before we had a late lunch and then played a 3 hour game (in which time the kids destroyed the house).  The game ended late, so they stayed for dinner also.  We ate dinner at 8.  Another set of friends came over for dinner and ended up staying the night so their baby wouldn't freeze.  Our house was warm, but we found out the next day their air mattress deflated, which was really too bad since we have a fairly nice one they could have used. 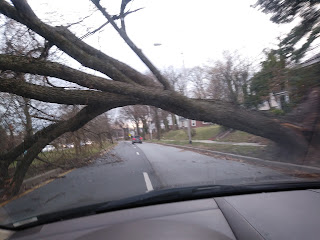 My kids thought it was fun to drive under this tree.