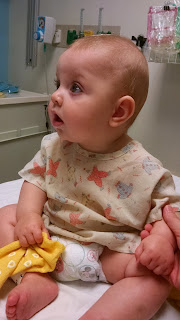 This is one of my all time favorite pictures of him.  Too bad he is in a hospital gown with hospital stuff in the background.  We had to get to the hospital at 5:30 am for his surgery at 7:30.  He woke up at 3 in the morning to eat, but I wasn't allowed to feed him, so Tyler was stuck with a crying baby all morning.  He did take a bath, which he enjoyed.  Once at the hospital he was up and we played with toys (they had a room full of toys as a distraction for kids).  At 7:30 I took him back to the operating room and watched them put him to sleep before I left.  Surgery was done around 8:45.  His testicle was pretty stuck high in the abdomen, so the doctor had to make an extra incision on the abdomen to get the testicle.  This also meant he got a block from the anesthesiologist instead of just some local anesthetics.  Once he was awake I was allowed back in the recovery room.  Tyler around this time dropped Madison off at a friends and came and hung out with me.  He was pretty sleepy as he was waking up.  I'm glad he didn't just cry and cry like the kid next to us did.  We picked up some oxycodon for him, but haven't needed to use it.  We have just been giving him Tylenol.  He has been a pretty happy kid too.  He isn't able to straddle anything, sit on hips, no jumpers for the next four weeks.  We have a followup sometime later this week. 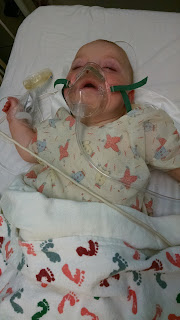 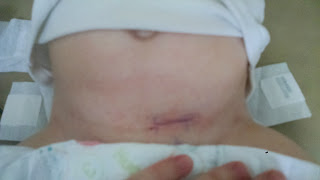